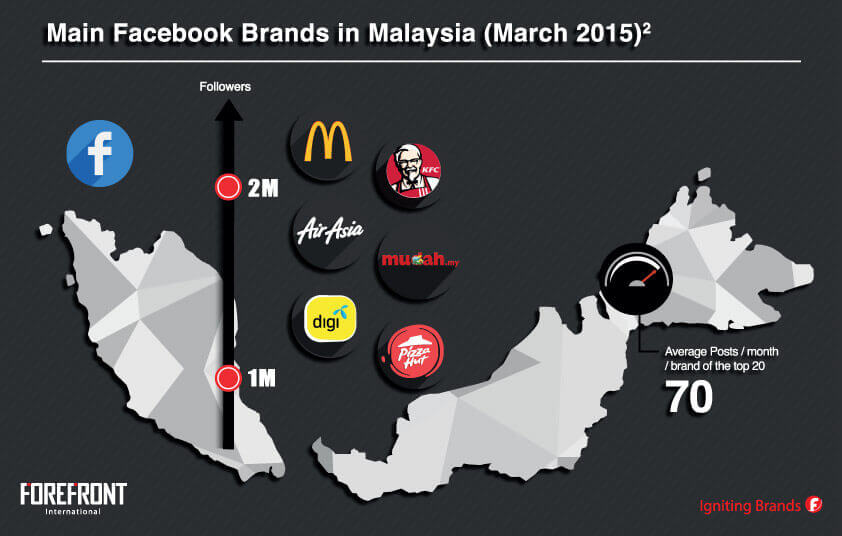 While Facebook is often related as a personal social network, it swiftly evolved to include brands into its business model, paving its way into becoming an integral part of the social landscape.

Over 80% of Malaysians with access to the Internet are on Facebook. If businesses are on the social network, they can potentially reach a huge number of individuals. (More than 15.5 million Malaysians are on Facebook1).

But Facebook is not a mass communication channel. It is based on affinity. The dialogue can only start when there is an emotional connection, when people seek for the brand to show the world they like it or accept its invitation via advertising or friend recommendation.

It is not by chance that market leaders have huge follower bases on Facebook: Brand affinity is crucial. It is proven that it triggers brand preference and can lead to increasing loyalty and market share.

Property brands are clearly expected on Facebook. To this day, they display more than half a million likes, which highlights the public interest in what Property Brands have to share.

The top players in the property industry are also gaining fast and steady momentum. Here are some figures about Malaysian Property brands on Facebook: 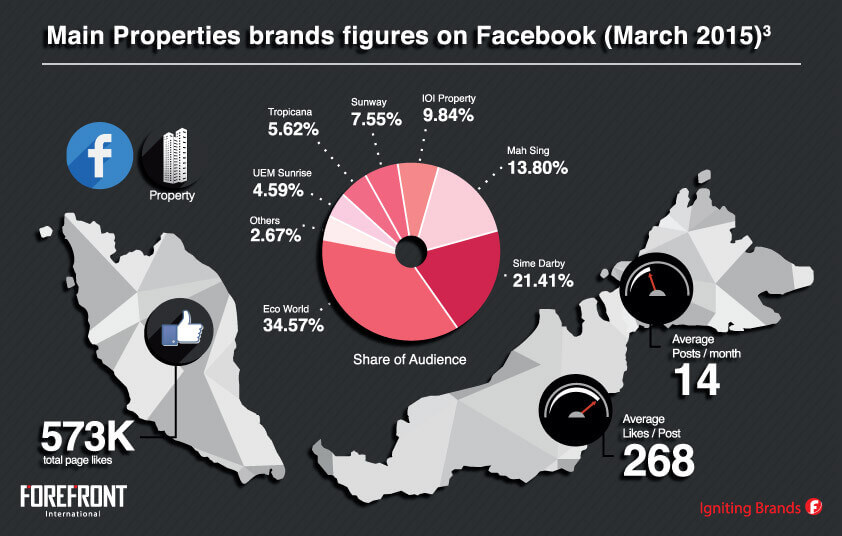 The number of followers for property developers’ Facebook pages is also flourishing at an increasing pace. More than merely an increase in terms of fan-base, the engagement is also intensifying, especially since August 2014. The dialogue is on! 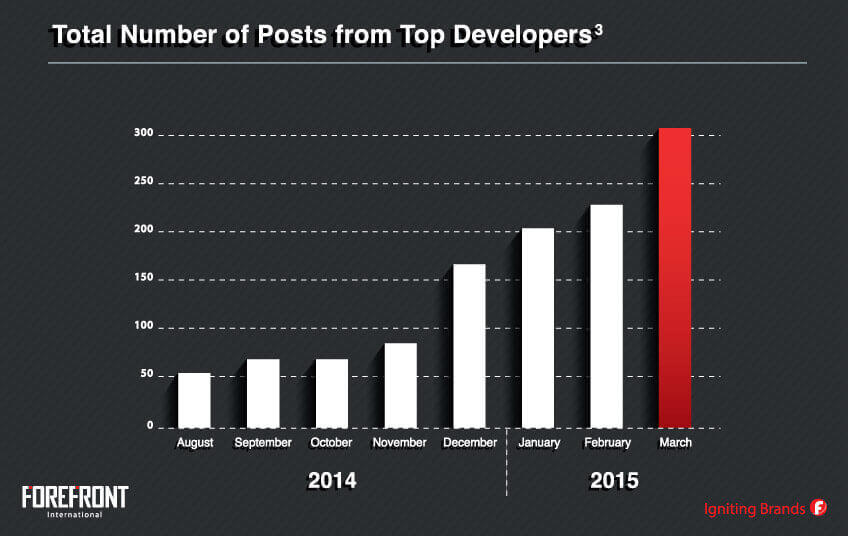 In the past eight months, Property Developers showed more and more activity. To date, the number of posts has quadrupled, reaching an average of nearly 14 posts a month per developer for the brands showing a maintained Facebook activity.

However, it is mostly driven by the five most active developers and there is a lot of disparity amongst industry players, probably due to a typical innovation adoption curve.

In parallel to aggregating data, we built an engagement index that shows the typical expected results of one post for one individual in the industry, regardless of the page followed (by measuring monthly total average interactions per post per designated page compared to its fan base ratio, from December 2014 to March 2015).

Just as quantity is not the most important factor in ensuring a healthy growing community of followers, there are several different types of content that have proven to trigger above average engagement. The most favourable content appears to be the ones generated by developers themselves. On the other hand, external content such as tips and tricks, interior decors and home related posts seem to garner less interest. This goes to show, original content still plays a major role when it comes to audience reach. 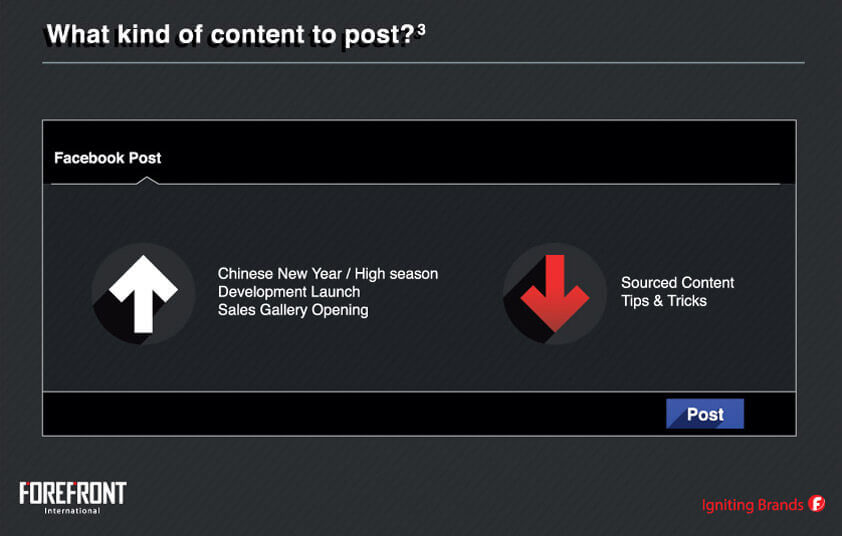 The timing of the post also plays a major role in order for your audience to notice your content amongst the crowded timeline. Rooting the post schedule on reach alone does not ensure engagement. In fact, people seeing your post is good, but people engaging with it is way better as it also boosts visibility via shares and has more chance to feature frequently in News Feed.

Therefore, we aggregated the data from the last quarter below, for you to have an idea of the best engagement a post can have during the week. 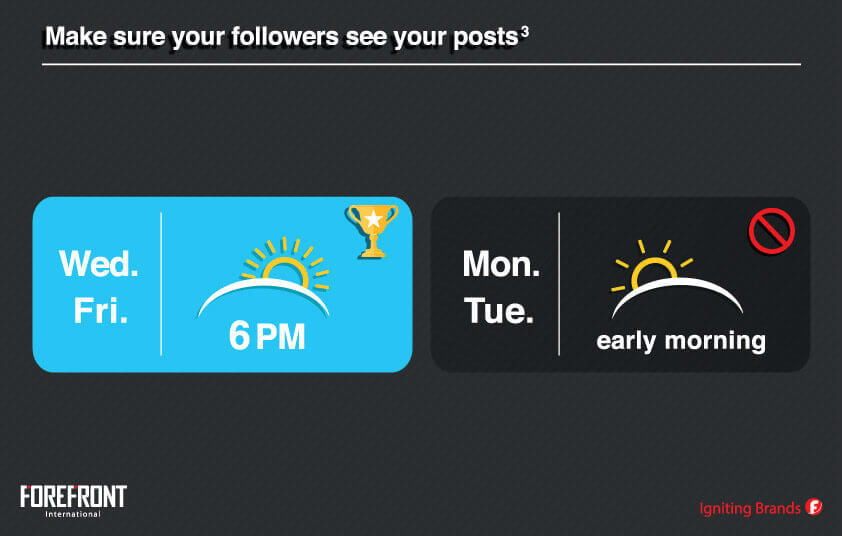 Taking a step back…

Unfortunately, from the macro point of view, a few Facebook accounts are actually witnessing the end of this growth phase as we start seeing diminishing followership. This could potentially stem from a too pushy acquisition strategy, or simply not meeting expectations in terms of content mix, content quality, timing or frequency.

So what should you do?

Have a diversified content strategy with consistent brand messages cleverly stitched into curated content, along with good timing, frequency and quality editorial to build and hit audiences; and subsequently increase brand affinity through audience engagement – all of which are ways to ease sales conversions efforts.

At FOREFRONT, our Creative and Communications specialists help to shape brands that preserve persuasive storytelling and precise placement. By providing strategic communications counsel, we make sure that all the communications goals are reached and analysed. Don’t hesitate to contact us for more information. 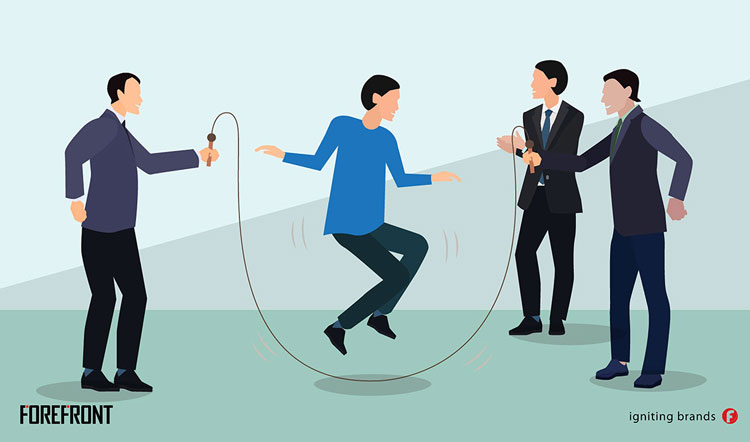